Are You Following and Imitating Jesus or Paul? 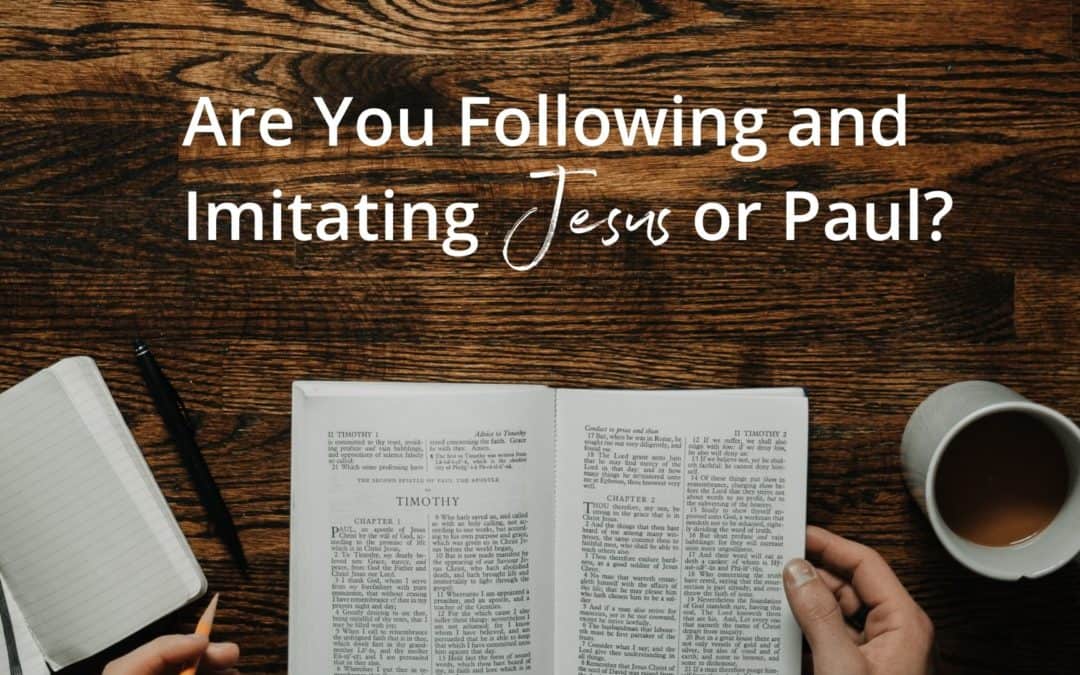 I once had an atheist friend post that most Christians he’s known would be better described as “Paulites” instead of “Christians.” What did he mean?

The Apostle Paul wrote 13 of the 27 books of the New Testament. Furthermore, most Christians have a “Bible within a Bible” that are the books they actually read, and many of those are written by Paul. Books such as Romans, Galatians, Ephesians, Philippians, Colossians, and the Corinthians get a lot of focus as they are letters from Paul to a group of Christians. This makes them seem straightforward and applicable, especially compared to lists of Old Testament laws, overly specific descriptions of loops and acacia wood (thanks Exodus 26!), or the morally complicated stories of the Judges.

Is that true? Does it matter? Let’s take a look!

In Woodlands in the Word this week, you hopefully read the third and fourth chapters of Philippians. While reading, you might have noticed that Paul does something somewhat strange.

Paul writes that the Philippians should “join together in following [his] example” (Phil. 3:17). Later, in 4:8, Paul writes his famous “finally,” which directs that same group of Christians to think about all of those good things (true, noble, right, etc). You might have noticed that we usually memorize verse 8, but stop before verse 9. Why is that?

I wonder if it’s because Paul seems to say, “Here are two chunks of things you should do. First, think about all of these wonderful things. Second, put into practice anything you heard or saw in me.”

Wow. That guy was bold.

And in case you thought that was some sort of outlier, check out these comments by Paul written to other Christians:

“I plead with you, brothers and sisters, become like me…” – Galatians 4:12

“For you yourselves know how you ought to follow our example.” – 2 Thessalonians 3:7

Clearly, Paul believed that those Christians who knew him should become more like him. So how does Paul talk about himself in Philippians 3-4?

Paul lists his “spiritual” or “religious” resume and declares that he considers those things “loss for the sake of Christ” (3:7). He goes on to “consider everything a loss because of the surpassing worth of knowing Christ Jesus my Lord…” (3:8).

Paul had so many different things he could point to and say “look at how important this is!” He could have boasted about his accomplishments, his cultural heritage, or even his religious zeal. Instead, he adjusted everything’s value relative to Jesus.

There are numerous places where Paul encourages other Christians to leave behind the old way of life, and in Philippians he says of himself: “But one thing I do: forgetting what is behind and straining toward what is ahead” (3:13b). Obviously, Paul didn’t mean that he literally forgets or ignores his past (the entire letter of Philippians is a letter to people he met in the past). Paul explains that his focus becomes the future, especially as it relates to his relationship with God and his goal to reach the Gentiles for Jesus. Just as Paul re-evaluates the value of his past life, he also left the old way of life behind.

Although Paul might not have used that type of language, he encourages Christians to actively think in very specific ways. First, he tells them to “rejoice in the Lord always” (4:4). In other words, continually find and acknowledge your joy in Jesus. Second, replace worry with “prayer and petition” (4:6). When you start to worry about specific life situations, use that as an invitation to “present your requests to God.” Third, Paul tells them to think about things that are “true, noble, right, pure, lovely, admirable, excellent or praiseworthy” (4:8).

While it can be easy to see our thought life as something that is passive, Paul says to actively find joy in Jesus, turn worry into prayer, and bring to mind good things. It may sound like a modern idea, but Paul himself trained his thought life.

Paul shared that he wanted “to know Christ” and “to know the power of his resurrection and participation in his sufferings, becoming like him in his death…” (3:10-11). Time and time again, Paul shared from his own experience what it was to follow and become like Jesus. Consider, for instance, that Paul also wrote “Follow my example, as I follow the example of Christ” (1 Corinthians 11:1). Paul became like Jesus.

Conveniently, that brings us full circle!

I think my friend’s post might actually mean “most people who identify as Christian that I’ve gotten to know, believe what Paul believed, and yet look nothing like Jesus.” Because to be a Paulite would actually mean looking a lot like Jesus – because that is what Paul did. He didn’t just believe certain things in his head. He didn’t just say “these things are true.” He structured his thoughts, actions, and passions around Jesus. He took steps that Jesus took (even – or especially – the ones that hurt).

And that means we have two very important things to consider:

First, are you becoming more like Jesus, like Paul was? Do you (and me!) actively find ways to walk in Jesus’ footsteps? It is easy to find some other ideal in this life to chase after. It is even easy to read our Bible and go to church without actually changing. Do the things you learn translate to active steps of obedience?

Second, who are you following right now? Paul’s words demonstrate a powerful but slightly uncomfortable strategy of God: we are supposed to be following other humans. While Jesus is ultimately the one we follow, it is good for us to have people in our lives who look like Jesus that we can learn to be like. The fancy word for it is discipleship. Do you have someone in your life that looks like Jesus, someone who knows him and is actively becoming more like him? Could you learn to become more like that person, to follow them as they follow Christ?