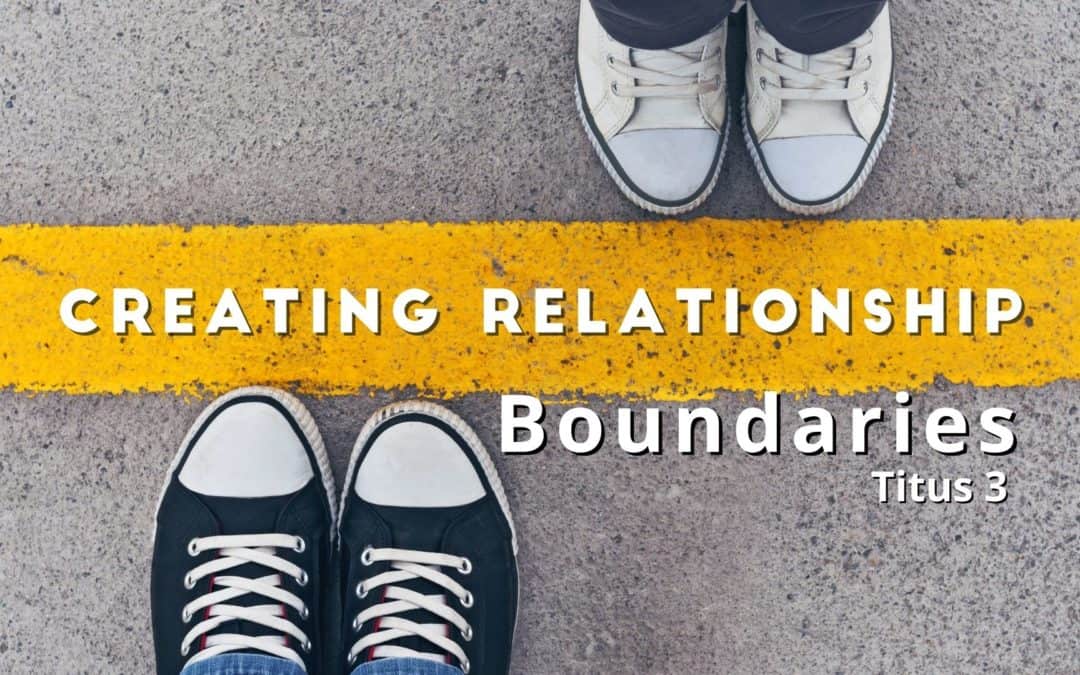 On Tuesday, we read through Titus 3, which wrapped up that wonderful letter from Paul. He began chapter 3 by saying, “Remind them,” which is a reference to, “us… a people for his own possession” from Titus 2:14. Paul is addressing all of us, those within the church, and he encourages us to establish some relationship boundaries within the church and within the world. Titus 3:10-11 will say, regarding a divisive person, “have nothing more to do with him, knowing that such a person is warped and sinful; he is self-condemned.”

Within the church, we do need to work at and maintain relationship boundaries. But what do those boundaries look like, and how are we to understand them? And where do we draw them?

An important distinction as we consider the passage is the difference between “judgment” – or wisdom – and judgmentalism. Judgementalism says, “Because you act, live, or are a certain way, you are unworthy of love or less valuable. We don’t want you or care about you.” Judgementalism creates boundaries between people and creates cliques or factions. This is not what the passage is encouraging.

Exactly the opposite, in fact! Verses 3-5 say that before grace, “we ourselves were once” rejectors of God and wisdom. But God “saved us, not because of works done by us in righteousness, but according to his own mercy.” This universal offering of grace tears down dividing lines and brings humility and unity. The church of God is not a place for judgementalism (although unfortunately, many still fall into it).

But there is a place for wisdom in who and how we associate with people. Using wisdom – or judgment, if you can separate it from “judgementalism” in your mind – creates boundaries around character traits and personalities that can compromise our ability to live out Christ-likeness in the world. Wisdom helps say, “Because of this attitude, belief, or trait, I know I need to guard my heart in this way around this person.”

Which way? Let’s consider the text.

First, we are to, “show perfect courtesy toward all people.” (3:2). Courtesy towards all people is a relational boundary Paul points to – but probably not one we would point to ourselves! Notice that Paul’s “all people” includes those in authority – which at that point certainly meant people vehemently opposed to Christ.

The Greek word here for courtesy is πραΰτης, which means, “gentleness” or “humility.” We’ll look at our need for humility a little in the next section, but the idea is that considering others in the same vein as ourselves cuts down our arrogance and should create courtesy and gentleness in our attitudes.

As a result, it is wise to guard ourselves against those who are uncourteous, unkind, ungenerous, or arrogant. This is hard, though, because arrogance and self-assurance often come across as confidence – something we tend to value. What’s more, un-courteousness is often presented in funny, snide comments – which can make an uncourteous person seem fun to be around. But that attitude will slowly erode our opinion of others made in God’s image.

This wisdom is fueled by the knowledge that we were separated from God, and that our unity with Him – and our right understanding of the world through His Word – has been given to us by grace. We are not better because we know more rightly – grace gives no cause for arrogance. Instead, the truth of the gospel should lead to humility, and that humility should lead to kindness towards all people.

This kindness involves not just courtesy, humility, and gentleness – which are words that refer to attitudes – but also devoting ourselves to good works (verse 8). It’s more than just an internal posture of graciousness, but it’s an external one as well.

Living in light of the humble gospel will be evidenced by gentleness and service. This is how Christ-followers are called to act – and we’re called to be influenced by those who are acting in similar ways.

This certainly doesn’t mean we spend no time with those who are struggling in these areas. But we do need to guard our hearts, and we need to consistently challenge these attitudes. Christ came in humility and gentleness, not as a conquering king, but as a humble servant. The attitudes of those who bear Him name should reflect the same.

What boundaries do you need to set in your life to guard against these attitudes?