A List of People to Avoid (should people avoid you!?) 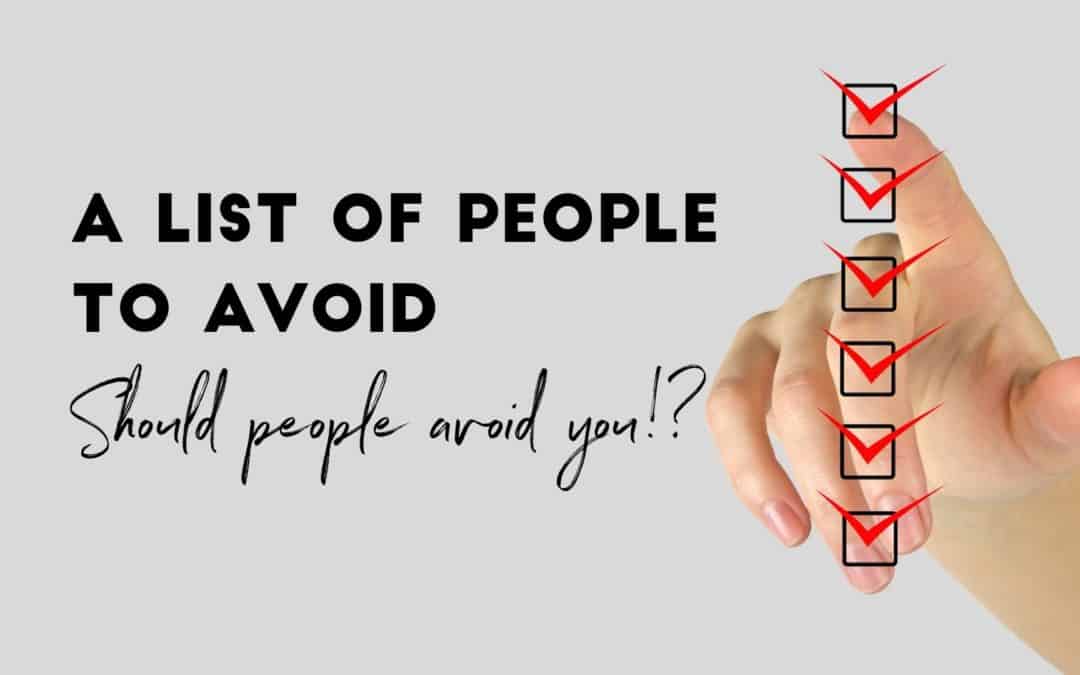 In 2 Timothy 3, Paul gives a list of people “in the last days” that we should avoid. These types of lists are fairly common in the New Testament, but the word “avoid” sets this list apart. Usually, it’s a list of behaviors that are from “the desires of the flesh” (Gal 5:17), or “what is earthly in you” (Col 3:5), or describing people “filled with all manner of unrighteousness” (Romans 1:19). But this isn’t so much a list of character traits that are evil, but rather traits that are unwise or poisonous.

The word translated as “avoid” is ἀποτρέπω, and it’s a word used exactly one time in the New Testament. A popular Greek Lexicon defines it as, “purposely to avoid associating with someone.” And why should you not associate with these people? Because, as it says in verses 6-7, they’ll deceive you, they’ll threaten your family members, and they’ll lead people away, stuck in their ignorance.

Whenever we read these types of lists, two things tend to happen. First, we skim. Lots of words included together make our eyes gloss just a little, and we don’t dwell on the words or ideas. And secondly, we probably associate the words with various people. Just a little innocent finger pointing! “Oh, I’ve seen that character trait in Justin!” “Ooof, that’s Janet to a T.” “Man, got Jared with that one!”

But what if you’re displaying these traits?

What if a person Christians should avoid spending time with is… you?

So let’s take some time, and consider this list slowly. Where can this list bring conviction that can lead towards godliness? (2 Cor. 7:10)

Four times in this list, Paul points to misdirected love. He starts by saying those you should avoid will be self-infatuated lovers of self. This doesn’t refer to healthy self-esteem, but rather an unhealthy over-self-esteem and narcissism.

“Oh, that’s so rare!” (says the person who hasn’t been on Instagram lately)

Just like Jesus’ warning in Luke 16, you cannot serve both God and money. And if love is directed toward money – if wealth is an end, rather than a means to an end – then your priorities are askance and need evaluation.

Pride speaks to an aloofness or distance from others – a looking down the nose – or a view of constant superiority. “I can’t believe they would do that! I never would!” This is pride. And it cometh before… what was that again?

Rather than aloof, arrogance views others as a tool or step towards your own goals. Others are valuable if they can be used, and worthless if they can’t. Where are you tempted towards this in your heart?

The word used here is translated as “blasphemous” and “slandering” in other places. It would refer primarily to verbal abuse. Do you use words to build others up, or tear them down?

Disobedient to Their Parents

Parents celebrate this is on this list, but we all need to consider what obedience looks like at every stage of our life. Notice this is not “dishonoring to parents” – but obedience.

Thankfulness is a posture of humility, and ingratitude is one of the surest signs of arrogance and snobbery. Contentment is something Paul talks about quite often, it’s a gift we can walk in, but it has to be a choice.

This is another “Timothy letter exclusive” word, being used only also over in 1 Timothy 1:9. There, it’s paired with “profane.” It carries the notion of, “being unwilling to avoid the bad things of the world.” Unholiness will be apparent in browser histories, Netflix watch patterns, or in patterns of speech or language.

This is hard-heartedness. It’s unfeeling, uncompassion, unempathetic. Heartlessness can be from an unsoftened heart – one that God hasn’t yet changed – or a hardened heart, created by bitterness. Cynicism is a popular expression of heartlessness today.

Nothing is ever good enough. Maybe contentment will come next week? If only the car were a little bigger, or the house was a little clearer. But there’s always more to get.

This passage is filled with fantastic Greek words! The word translated here as “slanderous” appears 37 times in the New Testament. Three of those times, it is translated “slanderous” – all three times in Paul’s pastoral epistles: 1 Timothy 3:11, 2 Timothy 3:3, and Titus 2:3. The other 34 times it’s translated directly: devil.

Jesus, in John 8:44, accuses the Pharisees of slandering His name: “You are of your father the devil, and your will is to do your father’s desires. He was a murderer from the beginning, and does not stand in the truth, because there is no truth in him. When he lies, he speaks out of his own character, for he is a liar and the father of lies.” This is slander. And the word devil, there, at the beginning? It’s the same word as slanderous here in 2 Timothy 3:3.

Self-control is likely one of the most skipped fruits of the Spirit, especially in today’s culture of instant gratification. Here, it is a different word than is used in Galatians 5 – it could more easily be translated as “uncontrolled.”

It’s unlikely to stumble across someone who is outright savage, violent, and cruel in today’s world. But many TV shows and video games celebrate brutality; is that celebration something that is rejected, tolerated, or enjoyed?

There might be a simple lack of value for the good things of God. This might involve a lack of understanding of what His good things are, or it might involve knowing – but not caring. Both situations imply limited or yet-to-start sanctification.

Do you keep your word, and do you defend your peers, friends, coworkers, and those around you? Or do you have a reputation of being willing to do whatever it takes to climb the ladder?

One who isn’t careful, or who is rash or hasty in decision making or priorities. They might play, ‘fast and lose’ with things that are important, quickly willing to make big bets for quick gains, and never consider the long-term costs. This is the opposite of wisdom.

In the original Greek, this is a single word. It’s used three times by Paul in his letters to Timothy – nowhere else! It refers to a recent convert, put in an advanced place too soon (1 Tim. 3:6), or someone who quarrels needlessly (1 Tim. 6:4). It seems to refer to one who thinks of themselves more highly than they should. The opposite of humility.

Lovers of Pleasure Rather than Lovers of God

Like the other ‘loves’ above, these are people with misaligned priorities. Here Paul is explicit – they would rather have pleasure than be made more into the image of God. Perhaps our TV viewing history might give us some insight into this area?

Having the Appearance of Godliness, but Denying Its Power

Finally, Paul warns us to avoid those who appear to be godly, but who don’t believe there’s actually any value in it. If one doesn’t truly pursue the things of God but wants to be viewed as a holy or upright person, that’s doubly dangerous.

This is an incredible list, and it’s wise to use it for self-evaluation. Don’t allow a list like this to lead you towards arrogance (or anything else that is actually on this list!). Instead, allow it to humble you. Allow it to bring conviction so that your life can look more and more like Christ.

I walk in the way of righteousness,
in the paths of justice,
granting an inheritance to those who love me,
and filling their treasuries.
– Proverbs 8:20-21